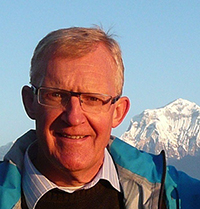 Leo de Leede (1955) studied pharmacy and became registered pharmacist in 1979.
He defended his Ph. D. thesis in Leiden in 1983 in the faculty of Mathematics and Sciences and specialized in biopharmaceutics, pharmacokinetics, analytical chemistry and drug delivery systems.
Next to this research assignment he was also a faculty teacher at the department of pharmaceutical technology and biopharmaceutics and a teacher at the school for pharmacy assistants.

Organon:
In 1983 he joined the department of Pharmaceutical R&D from N.V. Organon in Oss as a scientist and section leader. He developed with a multidisciplinary team several patented drug delivery systems like hormonal implants, vaginal rings, intra-uterine devices and depot injection preparations.

Yamanouchi Europe (Astellas Pharma):
He joined Yamanouchi Europe in 1991 and was respectively location manager, program manager and director pharmaceutical R&D. In 1999 he was appointed senior Director Pre-Clinical Development (90 staff) in Europe and was responsible for all preclinical (safety, efficacy, pharmacokinetic, metabolism and bio-analytical) and CMC (formulation, analytical, clinical trial material, pilot plant and transfer to production) activities in Europe of the global drug development projects in close collaboration with colleagues in Japan and the US. Several oral (controlled release), parenteral (liquid, freeze-dried, liposomal and lipid complex) and dermatological products were developed. Next to this assignment and to substantiate the drug delivery aspirations of global Yamanouchi, he started UNYPHAR and was project director from 1998-2001 of this consortium, a unique collaboration between industry and academia. Within UNYPHAR groups collaborated in a scientific network searching for advanced new strategies for drug targeting and drug delivery to inflammatory tissues. The collaboration was between the Universities of Utrecht, Leiden and Groningen and Yamanouchi.

OctoPlus:
In 2001 he became Managing Director of OctoPlus Technologies BV in Leiden. With the acquisition of Chienna BV in 2003 he also became Managing Director of Chienna. He was appointed Director Pre-Clinical R&D of OctoPlus NV in 2006. OctoPlus Technologies developed several patented drug delivery platforms for biologics and developed several pharmaceutical injectable products (liquid, lipid, liposomal and freeze-dried) up and including clinical phase II. Most advanced was Locteron, a controlled release interferon-alpha in biodegradable microspheres. This product was licensed to Biolex Inc. in October 2008.

Various:
He is the author or co-author of over 50 peer-reviewed scientific publications in the pharmaceutical and biopharmaceutical literature and of several patents. He was one of the founders of the Dutch Association for Pharmaceutical Scientists (NVFW) and of FIGON, a platform of Dutch scientific drug research and development organizations. In 1994 he was appointed member of the board of the Committee on Industrial Relations of the European Federation for Pharmaceutical scientists (EUFEPS) and was chairman from 1999-2008. He is lecturing in quality management and GMP related to production both in industry as well as in hospital pharmacy.